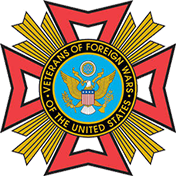 The objectives of the Veterans of Foreign Wars are fraternal, patriotic, historical and educational; to preserve and strengthen comradeship among its members; to assist worthy comrades; to perpetuate the memory and history of our dead, and to assist their widows and orphans; to maintain true allegiance to the Government of the United States of America, and fidelity to its Constitution and laws: to foster true patriotism, to maintain and extend the institutions of American freedom; and to preserve and defend the United States from all her enemies, whomsoever.

World War I was the war to end all wars, but 33 years later the United States became entangled in World War II following the Japanese attack on Pearl Harbor on December 7, 1941.

Again Vacaville’s young men, and women, were off to war. Among the hundreds in uniform from Vacaville was Michael Libonati, Jr., a Vacaville native, and also the son of local area pioneer fruit growers.

Young Libonati, a graduate of Vaca High, had become a second lieutenant in the Air Force, and was to see unending service as a bombardier aboard a Flying Fortress on missions over Western Europe.

It was a sad day in January 1943 when the War Department notified the young man’s parents, Mr. and Mrs. Michael Libonati, that their son, 24, was missing in action over Western Europe.

For many weeks following, the bewildered mother, carried on correspondence in an attempt to ascertain the fate of her son. At one point she was given assurance by the boy’s squadron commander, that he was a prisoner of war of the Germans; but as time rolled on Mrs. Libonati was to receive word from another source verifying the death of her son, who was struck by flack while operating his guns in a Flying Fortress. The plane crashed behind enemy lines.